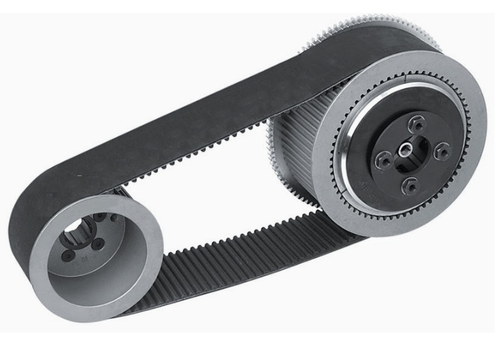 The serpentine belt is what keeps the engine accessories running smoothly and efficiently.
It connects the engine crankshaft on the outside of the engine to all of the engine
accessories. And it has a multiple V-shaped grooves that run vertically along the belt.
Since a serpentine belt is a single belt use to drive multiple devices, you as the car owner
and user are assured to be on the roadside if it got broken. This is why regular inspection
should be made of these types of drive belt to avoid the future issue.

If you look at the front of the engine under the timing cover, you’ll find a tooth belt in some
cases (although in most current vehicles, this belt is replaced by a chain). It’s attached to
the crankshaft and camshaft via several pulleys. Also called a Gilmer drive belt many years
ago, the timing belt has two jobs. It powers the engine’s camshaft and keeps it exactly in sync with the crankshaft. This ensures that the valves open and close at the right time. That’s why it’s called a timing belt. It times the Valve-train. Timing belts usually go bad after 90,000 miles. Some timing belts can last as long as 110,000 miles. Water pumps last the about same amount of time. It’s always wise to replace the timing belt and water pump together. It’s recommended to change out the water pump even if the part is still running fine. Chances are high that pump would fail before the next timing belt wear out. This Post explains why it’s a good idea to replace the timing belt and water pump together. At kamsiparts we offer you a complete kit that contains an OE quality timing belt and water pump for your car make and model. Alternator Belts: If the serpentine belt is not powering the alternator, then the engine has an alternator belt. It’s a small belt /that powers only the alternator. Depending on the design of the engine, the alternator belt may also power the power steering pump. Without an alternator belt, the battery won’t stay charged. Drive belt or V-belts: These types of belt are often found in older vehicles, but they offer several advantages. Apart from the crank pulley, the belt power at least one or two devices depending on the engine design. There are several individual belts to drive the power steering, air conditioning compressor, alternators, water pump, and radiator fan. If one of the belts break, the driver is likely to get home unlike the serpentine belt that powers all components with a single belt. But depends on the belt is driving. A drive belt is called v-belt because of its tapered rubber teeth. One of the issue with these types of the drive belt is the complexity, expense and they are trickier a bit to get to the right tension. The belt can rotate on the pulley under hard load. An improper charge will occur to the alternator if the drive belt loses. It can also cause the car to overheat.