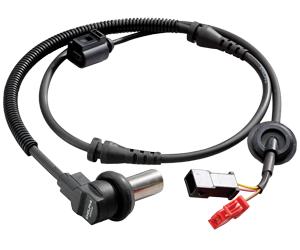 Anti-lock Braking Systems (ABS) allow control of a car in an emergency braking situation. The ABS relies on sensors that send data to the ABS module, allowing the computer to balance the speed of each wheel to prevent the brakes from locking up and avoiding dangerous skidding situations.

ABS sensors are sensitive, individually monitoring the acceleration and deceleration of each wheel through an electromagnetic field generated by the wheel’s rotation. Fluctuations in this field are registered and sent as signals to the ABS controller unit, which instantly applies precise braking force to each wheel to boost performance, efficiency, and safety.

There are different ABS sensor configurations depending on the vehicle. Older vehicles may have only one or two sensors on the entire vehicle’s wheel, while most new ones will have one at each wheel. Individual sensors at each wheel allow for more precise readings and operation but leave the system prone to more problems.

ABS Sensors location:
The ABS sensor usually is located in each wheel hub or rotor on a four-channel ABS. The ABS sensor may be in the rear differential in some rear-wheel-drive vehicles.
The ABS sensor mounts onto the wheel knuckle, which has a hole that allows the sensor to be mounted and tightened with two screws. The sensor connects to the connector and harness for the ABS.
These sensor mechanisms are of two components; a reluctor wheel or tone ring seated on the axle that spins with the wheel, and a magnetic or hall effect sensor that works together to send data to the ABS control module.

Over time, the reluctor wheel may become dirty or damaged to the point where it can no longer provide a consistent reading, or the magnetic/hall effect sensor may fail. When either of these components fails, the ABS will not function properly and requires service.

The tone ring is the component that the sensor is observing. On the tone ring are grooves, each groove measured as the wheel rotates. There are dozens of these grooves on each tone ring that delivers accurate speed measurements. If the tone ring gets broken, there will be a problem with the anti-lock brake system triggering a light on the dashboard to appear. The rings need to be in the best shape to avoid issues with the ABS.